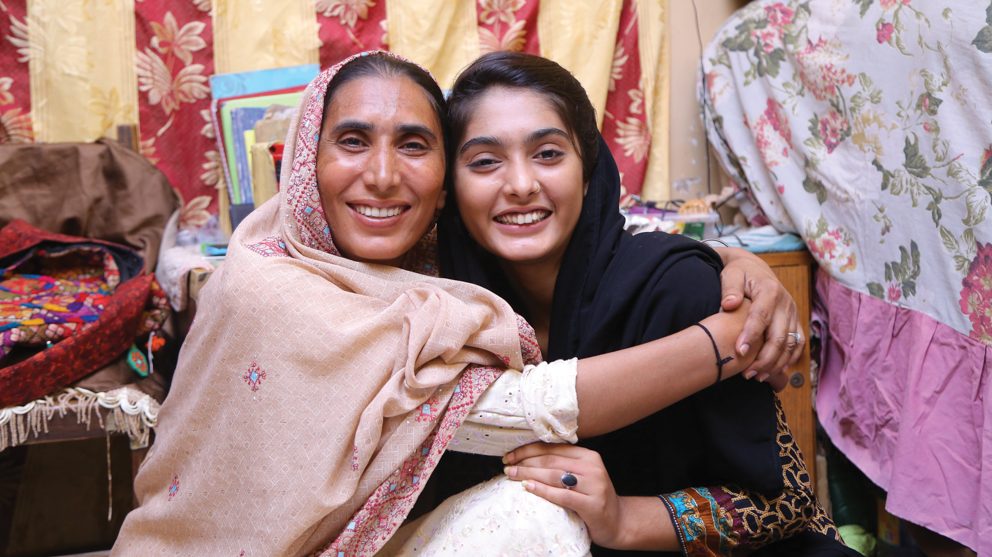 Zainab was a bright child, and her mother, who had never been to school herself, was determined to educate her children, a dream both she and her late husband had shared.

Fifteen-year old Zainab shyly leads me into the single room that serves as home to her, her mother and younger brother. The first thing I notice are her books, neatly organized on a packed shelf. One corner, with clean blankets and cushions laid out on the floor, serves as the sleeping and sitting area. An alcove offers just enough space for a tiny kitchenette and washing area. ‘It is small, but it’s our home. We are content here,’ Zainab’s mother smiles as she looks around.

On top of a clothes drawer sits a framed photograph of a young, man with a mustache. Zainab points him out to me with pride as her mother begins to share the story of their journey. 12 years ago, the man in the picture – Zainab’s father – died when she was just three and her brother still in their mother’s womb. A carpenter, he was shot by robbers after he struggled to save a motorcycle borrowed from his uncle. For years before Zainab’s birth, he had worked as a labourer in Saudi Arabia, sending hard-earned wages back home before returning home, a few months before the incident, to be reunited with his pregnant wife and daughter. 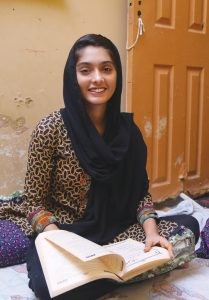 Shattered and left without an income, Zainab’s mother was forced to remove her from the nursery school her father had lovingly enrolled her into. After giving birth to her son, Zainab’s mother moved into a small bedroom in her father’s crowded home in the low-income industrial community of Taiser Town, also shared by her brothers and their families.

Zainab was a bright child, and her mother, who had never been to school herself, was determined to educate her children, a dream both she and her late husband had shared. After the move to Taiser Town, she found out about a new primary school for children from low income families, established by TCF. She immediately paid a visit to the principal.

The principal didn’t just admit little Zainab, she also offered her mother a housekeeping job at the school. It was the first time in her life she had ever held a job, and it not only helped her pay for household expenses, but also enrol her son when he came of age.

‘It’s been 12 years now that I’ve worked with TCF. If it hadn’t come into my life when it did, neither of my children would have been able to go to school, just like me’ she says.

The road as a single mother hasn’t been easy. Money is always tight, and she cannot afford any of the luxuries she and her late husband had once dreamed of giving to their kids. She is grateful for the security of her father’s home, but it is crowded, and she hates being a burden. With her income from the school she was eventually able to add a stove and kitchenette to her room to be able to cook their own food. But beyond essential expenses, Zainab’s mother has dedicated her life to making sure her children have all they need to complete their education. She saves every penny to spend on books and other school expenses.

Today, her struggles are paying off. Zainab just scored an A in her board exams, and her principal and teachers can’t stop praising her quiet dedication. Zainab may be just 15, but is wise beyond her years. Keenly aware of the sacrifices made by her mother and the opportunities given to her by her school, she is determined to make them proud. She plans to study computer sciences after graduating, and will be the first girl in the family to ever attend college.

‘My mother gave up everything for us. I can’t wait to be able to take care of her’ she says.