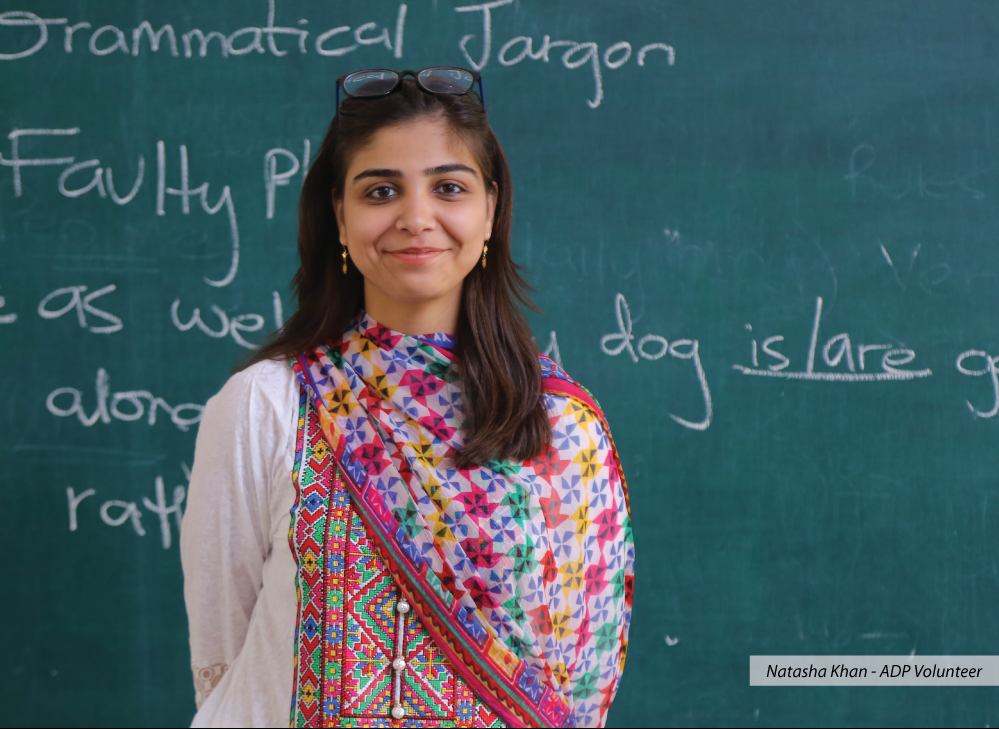 TCF Alumni Development Programme (ADP) is a volunteer programme initiated in 2014 by TCF alumni and other students enrolled at some of Pakistan’s best colleges and universities. They wanted to help other TCF graduates get admission into the top universities in Pakistan, particularly by helping them prepare for entrance exams.

Imran Shaukat struggled to get on a crowded public bus. The passengers hung on tightly to the rails as it departed from Orangi town, one of the largest low income communities in Karachi. Imran, a TCF alumnus, looked through the broken, winding roads of his community as he headed towards his university, the Institute of Business Management (IBA) – one of the city’s premier institutions.

‘I graduated from TCF in 2012 with a strong academic record and was close to clearing my Intermediate education. But at that point I just felt my dreams were higher than my reality. I wondered if I’d ever break through the class and social barriers to gaining entry into a good university. These thoughts were racing through my head when I got a call from TCF’s Alumni Development Programme (ADP). That call turned my life around,’ says Imran, who now volunteers as Team Lead of the Programme’s IBA Chapter.

TCF-ADP is a volunteer programme initiated in 2014 by TCF alumni and other students.

They wanted to help other TCF graduates get admission into some of Pakistan’s best colleges and universities in Pakistan, particularly by helping them prepare for entrance exams.

‘When I got into IBA and started studying with students who came from elite private schools, I realized that socioeconomic disparities are not barriers to friendships. As human beings, we all look for ways to help other people in need, and that’s how ADP was born,’ shares Nadeem Hussain, a TCF alumnus who was instrumental in developing the programme.

Neha Ahmed, a volunteer with ADP, feels that it is immensely rewarding to see the life changing impact of the programme on the lives of TCF students. After completing her O-Level from The City School and A-Level from the Nixor College, Karachi, Neha is pursuing her BBA from the Institute of Business Management (IoBM) and volunteers as Team Lead for the ADP Chapter at her University.

‘I was going through my university emails when I saw the opportunity to volunteer for TCF-ADP. I will always remember the first English class that I taught in the programme. Each one of the students was so eager to learn. It’s a great feeling to see people take control of their educational paths and to be a small part of their journey to success.’ says Neha.

Saira Haroon, a TCF alumna from Lyari is part of the ADP team managed by Neha. Saira is pursuing her BBA at IoBM and feels that her involvement with the ADP has truly enriched her university experience. ‘My own language, communication and social skills have improved significantly and the programme has given me much needed exposure and an opportunity to hone my managerial skills,’ she says.

While TCF schools provide its students with the education and ambition they need to succeed in life, they are still located in impoverished and neglected neighbourhoods. Being admitted at a top tier university means that these students will have to enter an environment that is very foreign to them, and challenging in many ways. ADP seeks to provide the support they need to succeed socially as well as academically in these environments.

Through ADP, aspiring TCF alumni make their first associations with the students of top ranked universities where ADP Chapters have been established. They mingle, learn, and often step out of their social comfort zones for the first time. Through this coming together of two apparently disparate worlds, individuals from both side of the divide are rendered an opportunity to view life through each other’s lens and find common ground.

‘I’m very proud of the fact that my Team Lead at ADP is a TCF alumnus. TCF alumni are not just book smart; they are street smart as well. Imran, our Team Lead, deals with matters at hand very practically. His good judgment comes from his real life and personal experiences. There is so much that I’ve learned working under him in just a year,’ says Natasha, who has completed her GCE O and A Level qualifications from Karachi Grammar School and is now a student at IBA where she is engaged with the Institute’s ADP Chapter.

Both Natasha and Imran are of the opinion that working and mingling with people from across the socioeconomic divide has truly been an incredible experience. ‘Initially I had some hesitation leading and managing ADP volunteers, but I have become much more confident and have honed my communication and social skills. I want to carry forward the torch and help other TCF alumni succeed and get ahead in life as well,’ says Imran.

This shared drive to utilise the transformative power of education for a better society has united our young volunteers, dispelled prejudices, and is producing a far-reaching impact. By connecting people from diverse socioeconomic strata, ADP is now proving to be an enactment of the change we seek to foster in society.