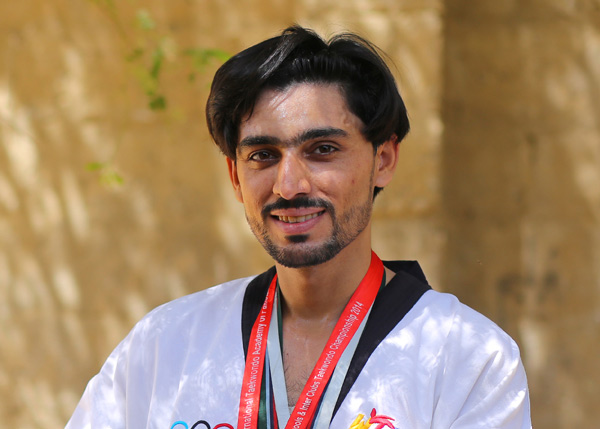 “My interest in taekwondo developed when I was 8. My cousin had signed up for martial arts classes near our home in Ittehad town, a low-income settlement on the outskirts of Karachi. I started going there with him to learn different forms of taekwondo and then practiced regularly.” shares Irfan Zaman, a TCF alumnus.

Being the eldest son of a daily wage labourer, life has never been easy for Irfan. He worked alongside his father to support a family of 10 members, including his 7 siblings. “I did several odd jobs up till grade 10 … as a shopkeeper, a clinic helper, a packer in a factory; juggling school, work and taekwondo was tough,” tells Irfan.

Irfan’s association with TCF however, was not established until grade 9. He attended a low-cost private school run by a community elder. “I used to pay as much as I could afford to stay in that school, but suddenly the principal started asking me for a full fee and other dues. Since I couldn’t afford to pay, he cancelled my admission,” reveals Irfan.

After joining TCF school, Irfan discovered a deeper dimension of kindness and generosity. “Had it not been for TCF, I would not have completed my matriculation. My principal not only approved my full scholarship but my teachers also helped me pay my board exam fee, for which I shall always remain grateful,” shares Irfan. After matriculation in 2010, Irfan started participating in local and national level tournaments and managed to get a black belt. He also competed in the Sindh Olympics. Irfan could not study further because his family needed him to get a job that would bring home some money.