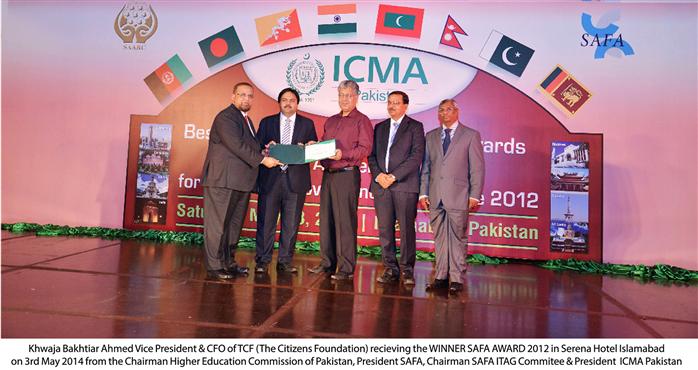 April 14, 2014: The Citizens Foundation (TCF) was declared the winner of “Best presented Annual Report Award 2012” presented by South Asian Federation of Accountants (SAFA) in Non-Governmental Organization category (including NGOs). The awards were distributed at a ceremony organized on May 3rd, 2014. SAFA is an apex body of SAARC (South Asian Association for Regional Cooperation) and is the largest accounting body of the region. Each year, the Institute of Chartered Accountants of each SAARC member country nominate the Best Annual Reports of Financial, Commercial and Industrial sector including NGO sector and submit these reports to SAFA for merit ranking among South Asian countries. TCF has been adjudged as the winner for the first time in its seventeen years of history. Previously, TCF has been receiving a runner-up award or Certificate of Merit each year since 2006. The evaluation is based on improvement in transparency, accountability and governance of the published annual reports entries from South Asian countries. Established in 1995, TCF reached a milestone of 1000 school units across Pakistan on April 1st, 2014. Today, TCF has the strength of 145,000 students in its schools spread across 100 rural and urban slums of the country with almost 50 percent female ratio.