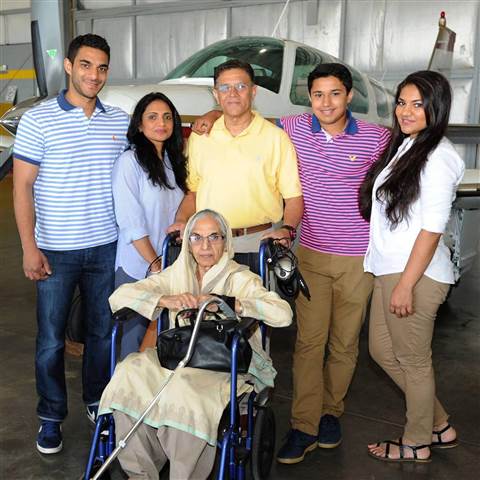 When 17-year-old pilot Haris Suleman and his dad, Babar, charted their adventure around the world to set a record, their supporters never imagined it would end in heartbreak. The pair’s single-engine plane crashed after takeoff from an airport in American Samoa as they neared the last leg of their journey in July. Rescuers retrieved Haris’ body from the wreckage in the South Pacific Ocean. Babar was never found.

But out of tragedy has been a wealth of generosity. The Sulemans had already earned about half of the $1 million they were trying to raise for Pakistani schools by completing their flight. Since the crash, donations have continued to pour in, and recently topped a staggering $3.1 million, family members in Plainfield, Indiana, told NBC News.

“In the aftermath of the accident, we saw how they were able to inspire,” said Babar’s daughter, Hiba Suleman.

The donations are going toward The Citizens Foundation, a nonprofit that builds and supports schools for underprivileged Pakistani children. With the extra money, which includes about $2.4 million raised through a single donor, plans now include building two campuses: one in the family’s hometown of Okara and the other, just outside of Islamabad. The donations will also pay for staff, materials and maintenance, said Amjad Noorani, an advisor to the foundation’s board.

“If Babar were alive, he would be overwhelmed by all of this,” Noorani said. “This is their legacy.”

The Sulemans’ 30-day trip began in Indiana in June, and was to include some two-dozen cities as they traveled east across the globe. Haris was piloting the six-seat Beechcraft Bonanza in an attempt to become the youngest person in command to circumnavigate the world with only one other person on board. About a third of the way into their journey, the pair made a pit stop in Pakistan. In the port city of Karachi, Haris was greeted with flowers from schoolchildren and interviewed on local TV stations hailing his mission.

“I know my little brother was in awe. He said, ‘Everyone wanted to take my picture. They were treating me like a celebrity,'” recalled Hiba Suleman, who had been in touch with her father and brother along the way and was tasked with updating their blog.

On July 22, around 10 p.m., the pair decided to leave an island of American Samoa to fly to Hawaii. From there, they would have gone to California, then home to Indiana. Hiba Suleman said she doesn’t know why they left so late at night. They may, she guessed, have been trying to make up time.

A preliminary NTSB report found that strong winds likely doomed the aircraft, which failed to gain altitude as it took off from the runway and then nosedived into the water. Haris’ body was found strapped into the pilot’s seat, but there was no trace of Babar nor other parts of the plane.

The Coast Guard called off the search after four days. The underwater equipment used to locate Babar was unable to go deep enough to continue looking; the family hopes to eventually pick up the search again.

Hiba Suleman, a law student, was at a conference in Washington, D.C., when she got the call from her mother that something was wrong. The news brought her to her knees. Haris, she said, became a pilot and was willing to embark on this trip because flying was also their father’s passion. The precocious teenager, who was going into his senior year in high school, wanted to be just like him.

“I was looking at pictures and I realized that Haris is always at my father’s left side,” she said. “They would always joke that ever since he was little, he was like my father’s second-in-command.”

In the coming months,the family hopes to retrace the pair’s global footsteps by stopping in some of the same countries Babar and Haris saw along the way, including Pakistan. “I don’t think my brother really understood the magnitude of this trip and the impact that it would have on people,” Hiba Suleman said, “whether they finished it or not.”

Four months later, the loss of her father and brother has weighed heavily on her mind. There are times, she added, that she copes by pretending they are still traveling, flying high together. Her father is there, she imagines, and her brother — always at his side — is guiding them home.

© 2020 The Citizens Foundation USA. All Rights Reserved.
Site by: Bohradevelopers