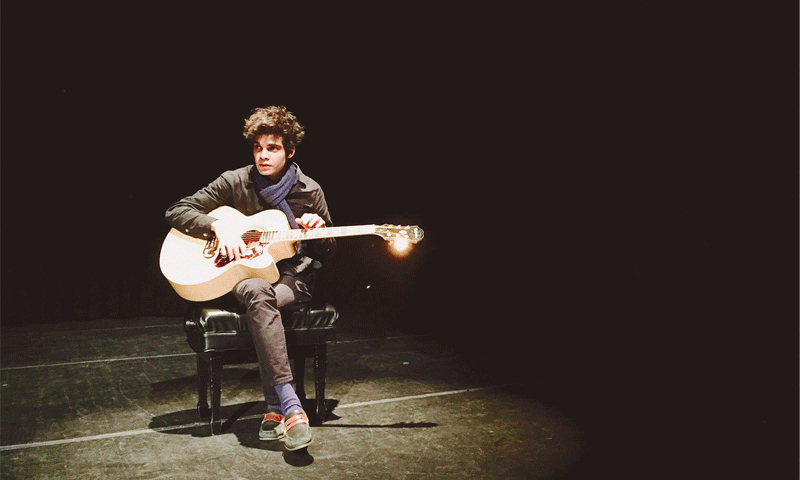 He learned the piano at six, picked up the guitar at 16 and used the Internet to teach himself a bunch of other things. Now he makes a tabla and dholak out of his acoustic guitar while also playing with its strings, taps and thumps his feet on the ground, claps, slaps his thighs, pounds his chest, clicks his fingers and turns all this noise into mesmerising music. All at the same time.

The multi-instrumentalist autodidact, 23-year-old Usman Riaz, who also happens to be the youngest TED senior fellow ever, learnt how to play the guitar by watching his idols play their music on YouTube.

“Learning is exposure. You learn by watching. When children learn how to walk nobody is physically moving their legs. They learn by looking at other people and realising that they can do this. I, too, kept watching videos and applying what I saw,” Usman explains.

But the musician describes himself first as a storyteller, who tells his stories through music and film. He acts as well. Here, too, he has not really taken film-making or acting classes but learned through observation.

“I’ve learned a lot of the basics but storytelling comes from inside you. I write a story first and then narrate it through music and film. Having composed the music for the award-winning movie Seedlings (Lamha) and a Dominican and Costa Rocan film called Primero De Enero, Usman now composes for his own short films, which he directs himself, too.

A fundraiser musical concert by Usman Riaz was organised by The Citizens Foundation (TCF) on January 5 to help raise funds for the 141 Schools for Peace campaign. TCF is spearheading an initiative to build 141 school-units across Pakistan in memory of each of the innocent victims of the Peshawar school attack on December 16, 2014.

Along with all that was evident the young genius’s shy nature. “I am not really shy, maybe a little clumsy but that’s the way I am, which is okay because it makes my audience laugh,” says Usman, trying to cover up his awkwardness. This was his first 90-minute concert.

“My aim was to help TCF collect funds for the schools they are building in the name of each student killed in the terrorist attack in Peshawar last month. I usually do 30 minutes at bigger venues with lots of people but here it was different. I dedicate this effort to the children of Pakistan and their right to education.”

The TED senior fellow still has a few years to go before completing his education. “Actually what happened was that when I was selected for TED Fellow, I got lots of opportunities to perform and speak at conferences. I took a year off and did all of that and then Berklee College of Music saw me perform and invited me to attend the school so now I am there in Boston. And since I got scholarship for a dual major I will be doing composition and performance, which means I still have three years left,” he explains.

And what he plans doing after completing his education? Usman says he will do what he is doing now, hopefully. “I’m performing at TED conferences, music festivals and would like carry on with that, God willing,” he says.

There is a family support, too. “Zia Mohyeddin happens to be my grand uncle. He is my father’s mother’s brother. My father’s mother also was a classical musician. And Zia Mohyeddin’s father and my grandmother’s father was a music scholar,” he provides details from the family tree. “So there is plenty of support for what I’m doing,” he adds.