In a traditional Pakistani school, teachers read textbooks to students. Students recite after their teachers until they memorize their books. Teachers call on students to recite passages and, on tests, they replicate long passages by memory.

At TCF, we’ve worked hard to build a curriculum and train teachers who can help children understand the concepts in their textbooks, while developing creativity and critical thinking skills. But we’ve also recognized the need to develop additional skills that are sometimes more important than academic content. These include social skills, collaboration, self-regulation of emotions and behaviours, prioritising one’s well-being and many others – all of which are critical to succeed in an uncertain environment and cannot be taught through textbooks.

In a rapidly-changing world, the demands of individuals entering society and the workforce have dramatically shifted from what they were a few years ago. It is estimated that 65% of children entering Kindergarten today will end up in jobs that don’t even exist right now!

How do we prepare our children for a future we cannot even imagine yet?

In 2017, TCF hired a team to re-imagine the curriculum of one of its schools in Karachi with an aim to strengthen 21st century skills in the early years. The team was led by graduates of the Vanderbilt and Harvard schools of education.

The team did three big things: they moved towards an activity-based learning model, introduced learning through play, and developed 150 joyful Urdu storybooks.

Research shows that the early years are when children can build cognitive and socio-emotional skills that set the stage for later success. Unlike a traditional Pakistani school, TCF’s new model for education enables children to develop strong language and communications skills as well as an ability to think independently.

The model is designed to be low-cost, contextualized to a low-income area, and scalable across a variety of settings. It is a model for what early years education can look like in Pakistan.

This year, some components of this 21st-century learning model are being rolled out in 504 primary schools of Sindh across grades Nursery (Pre-k) till Grade 2 to be followed by other TCF primary schools in the country.

What to Expect When You Visit TCF Next

Floor Seating For Our Little Learners 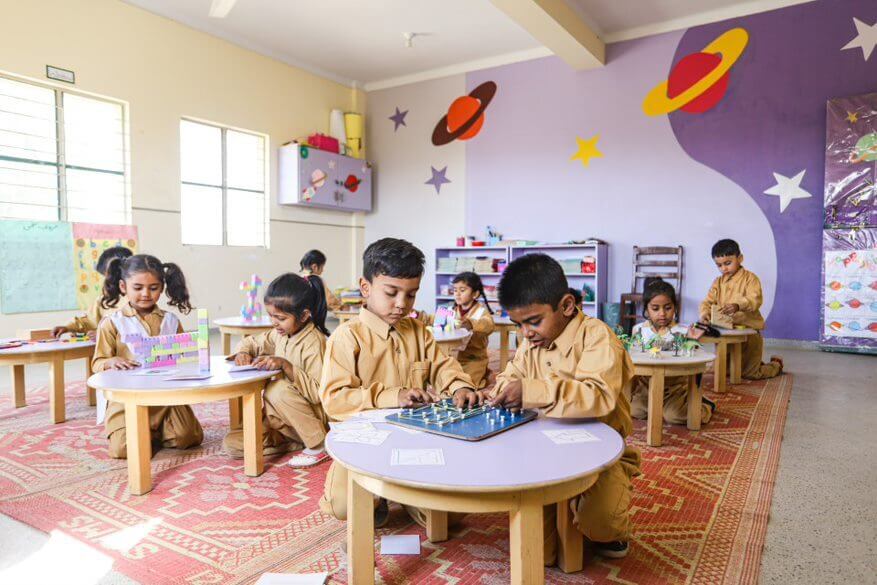 Now when you visit a TCF primary school you would see our children comfortably seated on floor mats. Most of us have the mistaken impression that children learn best when sitting still, but research now proves that many children need extensive mobility while learning. These children learn significantly more if they move from one area to another as they acquire new information.

Floor seating allows for more space, flexibility and open environment for exploration and comfort. It also gives them independence to move around their tables as per their requirements. It is also relevant to the cultural context that our children belong to . 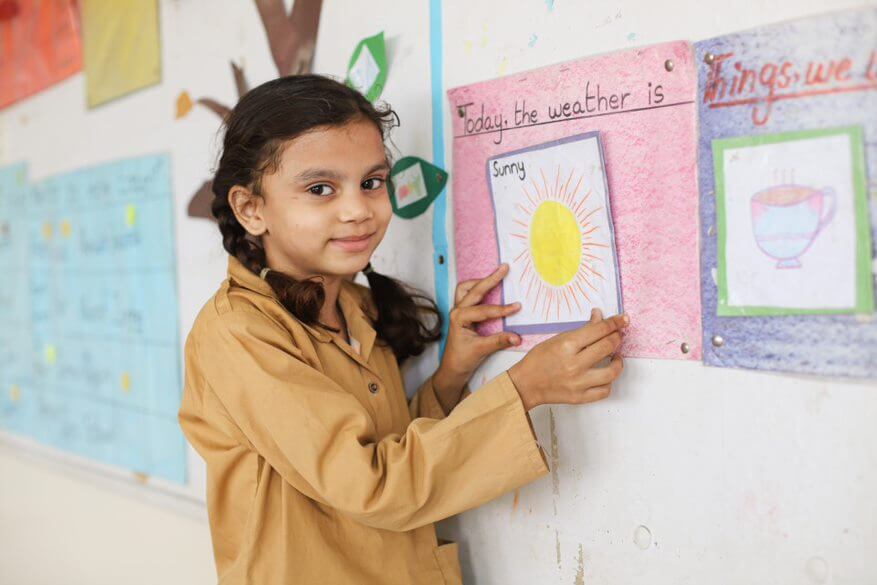 We have created these caring, child-centered physical spaces to enhance learning and encourage children to lead and regulate themselves. 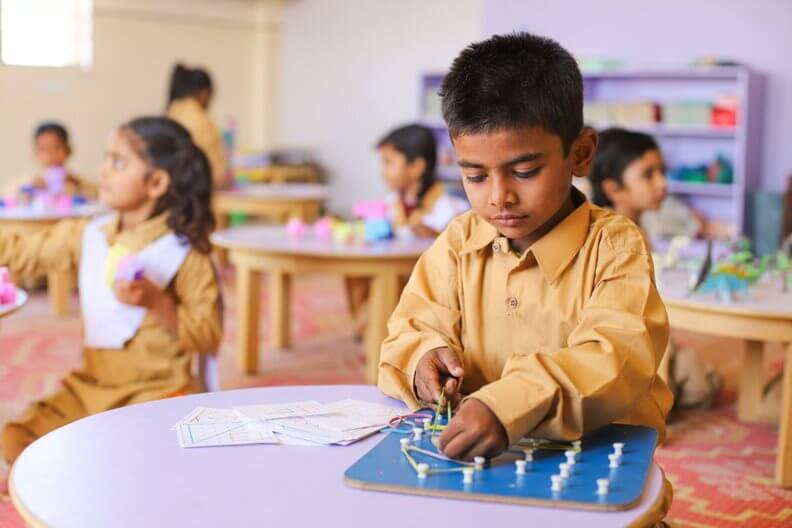 TCF has implemented play-based learning to create powerful learning opportunities across all developmental domains, including motor, cognitive and social and emotional skills. Children now have a “Choice Time” where they choose to play with the things they like. Various types of toys and activities are available for them to pick. Teachers serve a role to enrich and facilitate their play. Giving children this freedom of choice and autonomy promotes development of crucial social, critical-thinking, imaginative, and self-regulation skills.

Further we are also exploring theme-based activities around concepts in Science and Social Studies through guided play and construction actions. This enables students to explore these subjects in a fun and meaningful way. Students learn better as they attach ideas and skills to specific context. It helps them remember what they learn. 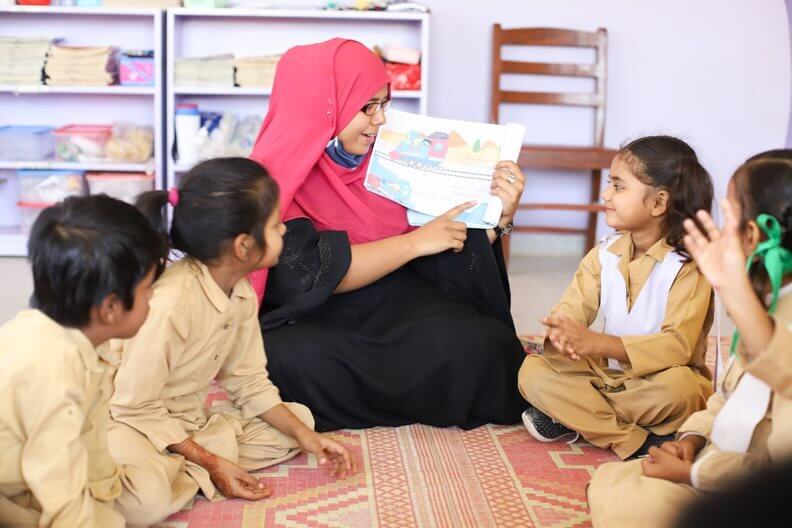 Story time embeds reading as an important daily practice. Exposure to storybooks at an early age inculcates creativity and critical thinking by exposing children to the wider world, challenging norms, and encouraging them to exercise their imagination.

The TCF team has developed nearly 150 joyful, meaningful and context-appropriate Urdu storybooks for children to discover the joy of reading from an early age. The books challenge social norms around gender, class, and tolerance for diversity. Content is in languages children understand (not English) encouraging self-esteem, parental involvement, and respect for culture. These stories bring experiences alive, create a sense of wonder and help sequence events. They also provide information, widen vocabulary and make important links between the spoken and written word. 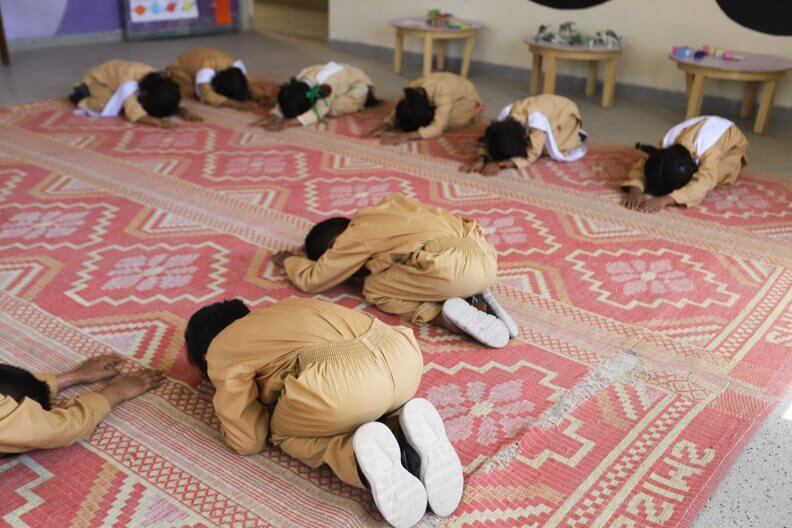 Student wellbeing and mindfulness is an important part of the programme which will be scaled across our primary schools in the next academic year. Through various activities we try and ensure that we are taking care of physical, mental and emotional health of our children.

Every day they engage in physical and breathing exercises together and are encouraged to think positively so that they understand the importance of caring for their bodies, minds and souls . 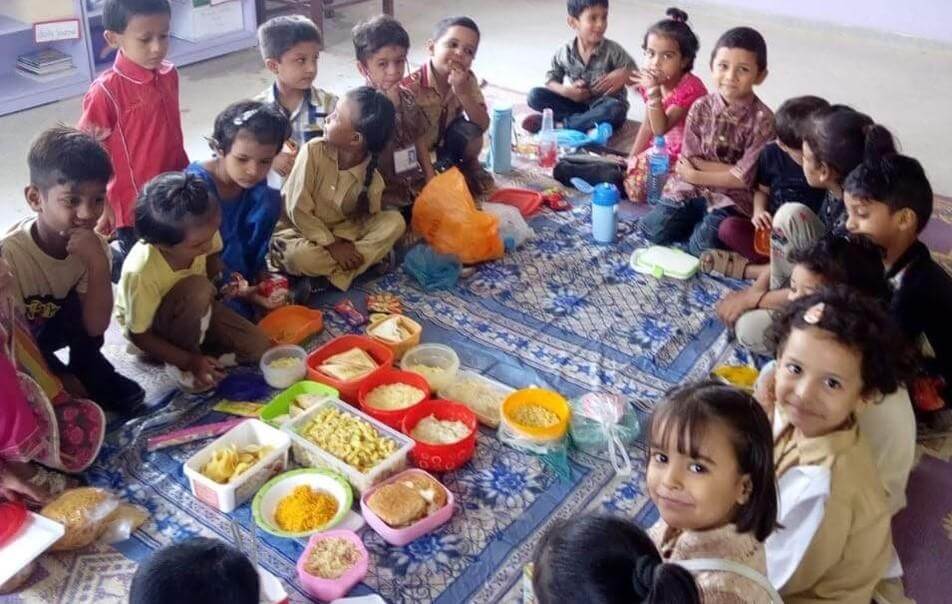 During snack time our children sit around the mat together and share their meals. It allows them to see and interact with each other. They also learn about the importance of healthy eating, hygiene and are responsible for clearing up at the end.

As this programme scales, the design lab team is continuing to create, implement and refine content and practices. We don’t know what the future will look like. But if we can develop our children into well-rounded, motivated and capable individuals who have the skills, knowledge and expertise in order to succeed in today’s world, then perhaps we can prepare them for the future – however uncertain it may be.

Why did TCF revamp its early years education programme?

It is estimated that 65% of the children entering kindergarten today will ultimately end up in new jobs that don’t even exist today. As educators, how do we prepare the children for a future we can’t even imagine yet?

We felt that the answer has to be in building some of the critical skills that will allow children to learn and thrive no matter what the future holds for them – creativity, confidence, critical thinking and cognitive skills, … a sense of community, and the ability to be mindful and resilient.

The early years are critical for the development of these skills – millions of neural connections are being formed every minute and we start seeing variations in the development of language skills as early as 18 months depending upon the child’s immediate environment.

So, in 2017, we put together a team of bright, young, passionate educators and gave them a brand-new school to reimagine and use as a lab to develop these multiple intelligences among their youngest students.

Where has this programme been scaled this year?

This year TCF’s Early Year Education programme has been introduced in 504 TCF primary schools in Sindh. The model is being implemented across grades Nursery (Pre-k) till Grade 2. This rollout will be followed up by schools in other provinces of the country in 2022. The team is also developing an iteration for TCF’s adopted government schools in Punjab and Sindh.

Who funded this educational research and classroom resources for children?

The research and scaling of this programme in Sindh have been funded by DFID Pakistan. Under this grant primary classrooms from Nursery through Grade 2 have been repainted with pastel colours, bulletin boards and word walls have been created. Additionally, educational toys, development games and activities and other learning tools have also been procured under this grant.

Why is sitting on the floor level important?

Reseach proves that floor seating is more pedagogically appropriate. Students can sit in a comfortable position and vary their positions according to individual needs which is better for their learning: “when students aren’t trying to hold themselves still in their chairs, they can integrate auditory, visual, and tactile systems of the body.” Proximity of teacher to student is much closer, and more equitable – a better social-emotional environment. It allows more opportunities for positive touch which is crucial for trusting relationships in the environment.

What has happened to the old furniture that was there in the primary classrooms?

Old furniture of our primary classrooms in Sindh is being moved to replace our ageing furniture in other parts of the country. TCF understands that our school furniture and other resources are procured through charitable contributions of our donors. We try to fully ensure that no asset is wasted before it reaches its supposed end-of-life.