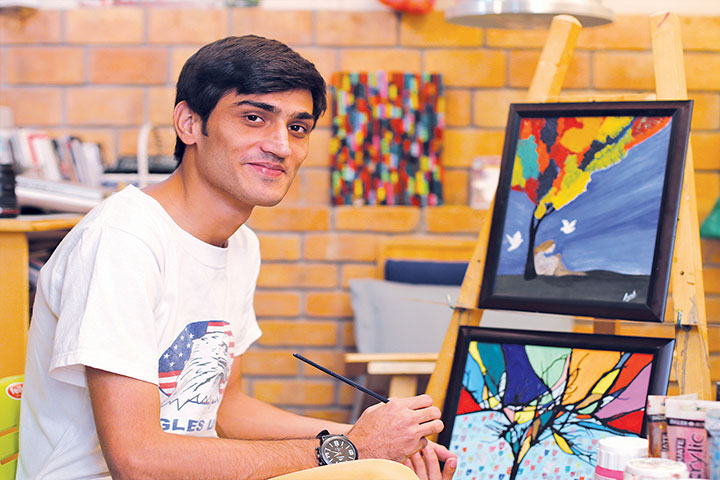 “We live surrounded by fear and uncertainty. Small issues can spark violent clashes between different ethnic groups in our area. I just want peace so that we live our lives fully, do our businesses, sit freely on the sidewalks and our children do not miss school even for a day. I feel that I must use my art to highlight and reinforce positive values and play a part in bringing peace to this city.”

Ayub Khan, grew up in a conflict-ridden and gang-infested area of Karachi called Lyari. Despite his tough neighborhood, Ayub has always been a sensitive student and his interest in painting began at an early age. His innate talent and flair for art found expression at school when his teachers encouraged him to paint and draw. Along with participating in several school-level art competitions, Ayub also won the First Prize in an art competition organized by Toyota Motors.

After graduating from TCF in 2013, Ayub got involved in an effort to promote peace through art in Karachi under the banner of ‘I am Karachi.’ This initiative focuses on replacing negative and politically charged graffiti around the city with visual images and messages that illustrate positive values such as peace, tolerance and diversity. Most recently, Ayub launched a promising career in the arts when more than fifty of his paintings were exhibited at the National Museum of Pakistan.