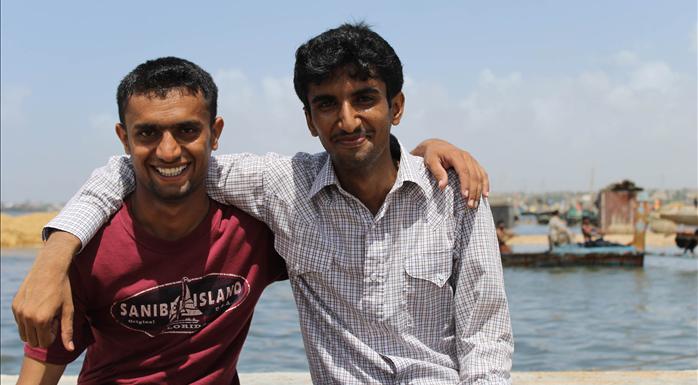 The two friends, Mansoor and Mairaj, both joined TCF in 2002 in Grade I, when the first TCF Campus was inaugurated in Rehri Goth which is an urban slum in Karachi. They had previously been studying in a local government school, but transferred to TCF Infaq Campus where they cleared their matriculation exams.

“At the time when our TCF School was built, there was little prior awareness of education in our area. We were brought up in a community where fishing was the main source of livelihood, being passed down for generations. The need for education was therefore a far-fetched concept. Our people didn’t understand the need for formal education until it was actually well within their means and reach. Since then, I’ve seen an immense change in the mind-set of my community members; the same people who didn’t believe in the need to educate their children are now strong supporters of the cause.” shares Mansoor.

After Matriculation, Mansoor and Mairaj completed their intermediate degree from Infaq Foundation’s Korangi Academy and are currently pursuing their bachelor’s degree at FAST, one of Karachi’s renowned higher education institutions, on a TCF scholarship.

“I remember it was just 7-8 of us who joined TCF initially, because at that time people were very resistant to change. It amazes me to think how much things have changed here. Now mostly all the boy and girls here are going to school! We are the very first people in Rehri Goth to reach university! We are treated with so much respect and admiration; people want to know what it’s like in a world outside Rehri Goth. I can never thank my teachers enough for what they have done for my community, going door-to-door recruiting children and counseling parents, but their struggles have paid off in a big way. And now we want to take their efforts forward and help out in any way we can.” says Mairaj enthusiastically.