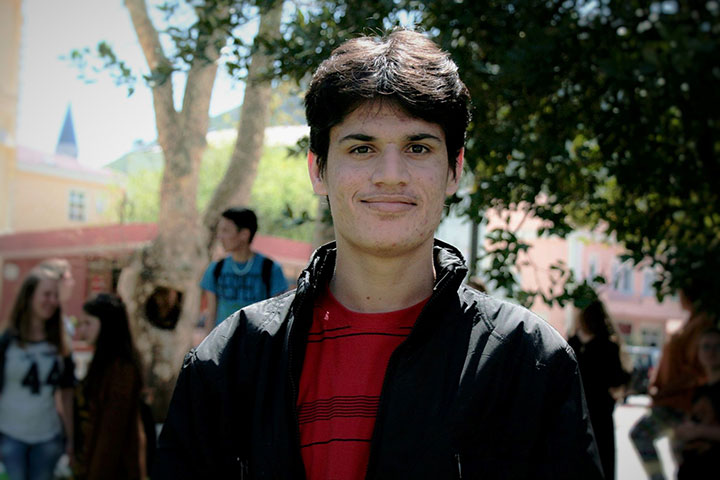 Originally published in The Express Tribune

“We live four to five kilometres from the Afghan border,” shares Zafar Ali. “I was born in 1997 in Khyber Agency (Fata) and spent my childhood there. My father is a truck driver. He doesn’t spend much time with us but he does manage to earn Rs10,000 a month. No one in my family graduated, even from Matric and my mother isn’t educated either. But I wanted to study. I started by going to a very basic school, where we sat on the floor and didn’t have any facilities.”

“A few bad things like terrorism and family problems began happening in my area so we moved to Karachi, which was very peaceful,” he says. “I live in Musharraf colony and I found a good school run by The Citizen’s Foundation when I moved to Karachi. They had good teachers and supported us financially. That school changed my life so much that on my farewell party, I hid a fistful of sand from the playground in my pocket. I still have that sand and school uniform with me to this day. It was a tough time though. Not all the boys in my class wanted to study. Sometimes, they would just want to have fun, like once when they broke a bulb playing cricket and didn’t tell the teacher who was responsible. I used to scold them. The school was giving us so much. Why did you damage their property?”

“In 2013, I passed my Matriculation with ‘A+’ grades and was admitted to the DJ Science College,” he continues, adding, “Then, I was told about applying to the prestigious United World College (UWC) scholarship in Singapore to continue my education. But when I saw the competition, I got scared. People should dream but they shouldn’t dream so big. At each stage of the selection process, I would think it’s over now. When they told me I got the scholarship, I couldn’t believe it.”

Descent from scholar to terrorist

“I had to apply for a Singapore visa but I had never made my travel documents before,” he shares. “I didn’t even have a computer, internet or phone from which I could check email or learn how to do things. So I used to take a one-hour bus ride to go to an internet cafe, where I would print documents and then go back one hour to get them signed. I used to stand in government offices in the heat by myself as even my father or mother couldn’t guide me. One day, I went to the police to get a character certificate and they told me I was a terrorist because I came from Fata. My visa application got rejected.” At this point in the interview, I was struggling to control my emotions. Zafar, on the other hand, never lost his calm.

Even the rejection of the visa didn’t stop Zafar as he went on to get admission into a different UWC campus in Bosnia and is currently studying in the International Baccalaureate programme there. I asked Zafar what kept him going through all the challenges that came his way. He didn’t have an older cousin, parent or friend guiding him through the process or showing him light at the end of the tunnel. “Our dreams are still too small,” he says. “Problems will happen but joy will emanate when we strive to overcome them. What we imagine we can accomplish in life is so small compared to what we’re actually capable of,” he says in perfect English, which he practised on his way home from school every day because friends made fun of his ‘backward’ Fata accent in class. “I worked hard to get educated so I can bring education to Fata. I’m not saying I can change everything, but maybe, I can guide at least one person like me.”