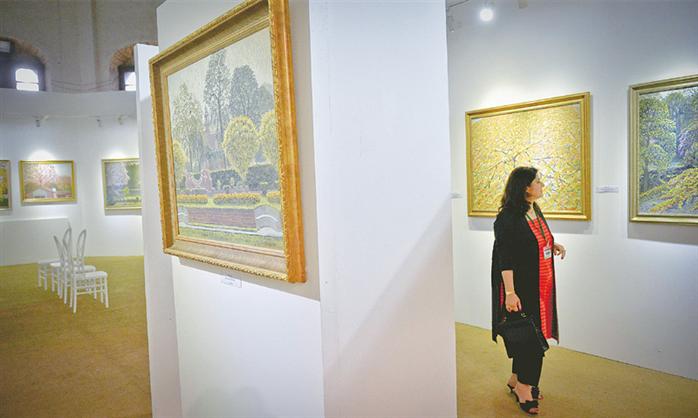 KARACHI: A collection of paintings by artist Shahid Jalal were put on display for an auction on Friday at the Sadequain Gallery, Frere Hall, to raise funds for schools of The Citizens Foundation (TCF).

The exhibition, titled Seasons of Lahore, mostly covered natural landscape of the historical city, in particular the vista of Mr Jalal’s neighbourhood in the cantonment.

On the sidelines of the show, Mr Jalal told Dawn that it was a challenge to paint the same subject over and over again. “My philosophy of painting is I paint what I enjoy. And I usually paint the landscape and lush greenery near my house.”

The artist had also captured the luxuriant landscape of the well-known Lawrence Gardens of Lahore and bamboo trees along Nisar Road. He had also painted trees and flowers growing in people’s gardens such as ‘Creeper on Ali Habib’s Entrance’, ‘Amaltas Tree with Beehive in Ghazala’s Garden’, depicting the attentiveness of the owners to gardening and landscaping.

Discussing the auction process, Nabeela Mustafa, the project coordinator of Supporters of TCF, a non-profit organisation that has been working in the field of education since 1995, said: “People can bid at the gallery or online and the bidding process will end on Sunday.”

The paintings fetching higher prices, according to her, were ‘Tree in Popti’s Garden’ and ‘Red Simbal Tree in the Evening’.

Shahla Shareef, a founding member of the STCF, said it was a challenge for them to keep coming up with different fund-raising ideas to sustain the 1,000 TCF schools in 100 locations nationwide. “A couple of years ago during one of our meetings we thought that people like art so why not do fund-raising through it. Fortunately our artists have been generous in donating their collections to us that has helped us to raise substantial amounts of funds.” Ms Shareef said this was the second time that Mr Jalal had displayed generosity as he had donated 25 paintings for a similar auction — held in Islamabad, Lahore and Karachi — earlier in 2008. This time round he had donated 65 of his artworks, she added.