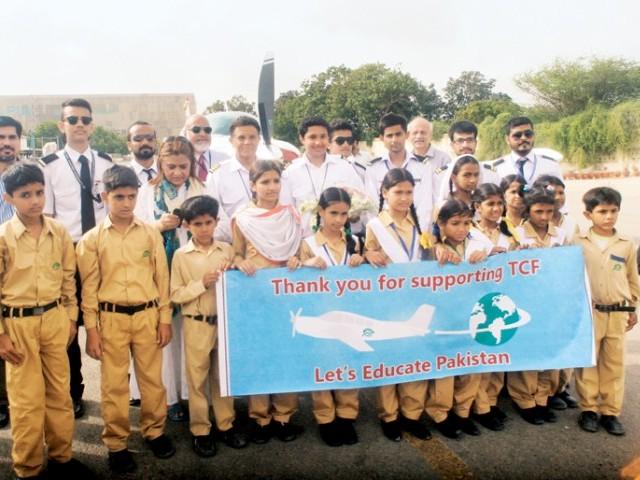 Published in The Express Tribune

KARACHI: The father-son duo planning to go around the world in 30 days to raise money for underprivileged reached Karachi on Tuesday afternoon. The 17-year-old Haris Suleman, who is said to be the youngest person ever to fly a plane, aims to complete a world journey in 30 days. Accompanied by his father Babar Suleman, who is also a pilot, the boy smoothly landed his aircraft at the runway of the Karachi airport. A man shouted ‘Welcome to Pakistan’, as Babar’s sister, Nasreen ran to hug him. She had come to receive the two at the airport. Several children of The Citizens Foundation (TCF) schools, whom the son and father are supporting with their project, broke into applause once Haris stepped out of the single-engine aircraft. “For you, we have come all the way,” his father told the school children, as they shook hands and took flowers from them. For the teenager, who hails from Indiana, United States, the journey is more about raising money for underprivileged children enrolled in schools run by the non-profit organisation than the desire to make a record of the youngest person to fly a plane across the world in 30 days. So far, they have raised half a million dollars, revealed Haris, clad in a spotless crisp pilot’s uniform. “We are also supporting 1,000th school-mark that TCF achieved this year,” he said pointing to the TCF logo on the plane. Before deciding to launch this project, Haris was an active volunteer at the TCF local chapters in the US. The idea to fly around the world came to him in January, when Babar, who was born in Pakistan, randomly asked his son: “Dunya ka chakar lagana hai? [Do you want to go around the world?]” On June 19, they set off from Indiana with Haris who had gotten his private pilot licence only a month-and-a-half earlier, leading the plane. They flew over water and deserts, visited tourist spots and collected souvenirs before they came to Karachi. So far, they have stopped in Iceland, England, Egypt and the UAE. “It has been fun but flying over the ocean made me nervous,” Haris admitted. “And we had to wear these ridiculous orange suits when flying over water.” Journey so far When Haris was only eight years old, his father would take him flying. In 2011, when he turned 15, he started formal training. “A 17-year-old can get a private pilot licence in the US with 50 hours of cross-country flying,” he explained. “When I left the US for the trip, I had 103 flying hours.” All the way from the US, Haris’ mother calls frequently to make sure his clothes are clean. “When I would go for training, she would text me to remind me if I had checked the fuel. ‘Was there enough oil?’” Nasreen, Haris’ aunt, admitted the family was very scared before the start of the trip and they tried to tell them to call it off. “Flying in a single engine aircraft is very scary,” she said. After spending five days in Pakistan with relatives, Haris and his father will head off to Bangladesh, Bali, Australia, Fiji, Hawaii and reach California by July 21. “Back home, my classmates are very excited,” said Haris. They want him to take them for a ride on his plane as well.