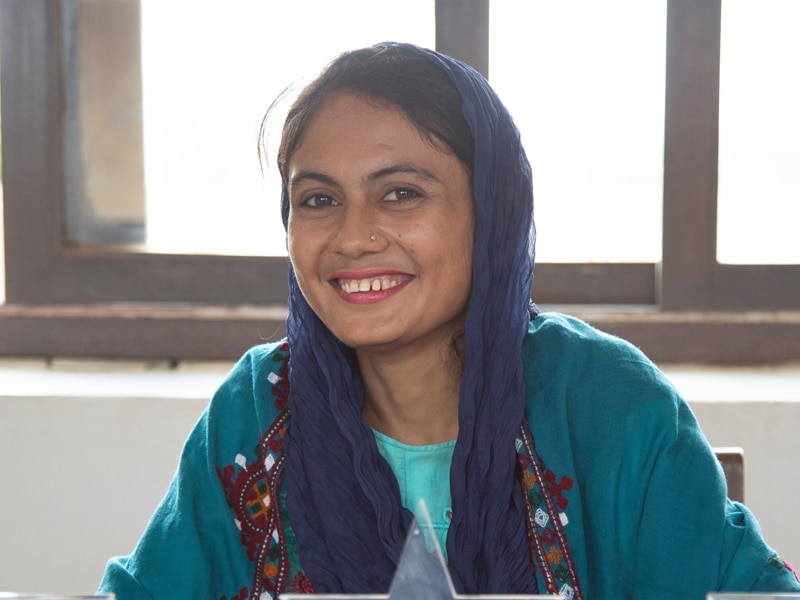 I have very scarce memories of my childhood before school. I remember playing with friends in muddy puddles after it rained. We would make clay pots or create dolls and balls out of wet dirt to entertain ourselves with. And, I helped my mother with chores at home; often going into the field and cutting crops.

I am one of eight siblings, so with my parents there were ten people living in our household. Our home was a mud-walled dwelling located in a Pakistani village called Keti Bunder, where I still live today. Most houses in the area don’t have brick walls or electricity, though we have a basic solar system which charges batteries and stores some power, so we can light a lamp, cook in the evening and recharge our phones.

During my early childhood, there were no schools in our village, but I had an uncle, my father’s younger brother, who had some education and taught me basic Sindhi, the regional language. I had lessons about the Quran from my grandmother.

I was six years old when my education began. A charity called The Citizens Foundation (TCF) was building a school in the village and before construction on the building started, I helped clear the land. There was initially some debate about whether the structure would be used for a hospital or a school, but I was hoping and praying it would be the latter.

Going to school for the first time

When the school opened there was a lot of retaliation within the community. Parents very rarely send their kids to school and in fact, in the early days there were more female students than male. The feeling among the community was: let the girls go to school, work their way up to fifth grade, then we’ll talk about marriage and staying at home.

Our education at this school cost us almost nothing, just a small amount each month, and immediately I had an innate sense for education and learning. I instantly wanted to get ahead. I was interested in languages, including Urdu and English. In the early grades, I loved learning words by singing songs. I would come home and repeat the gestures with the lyrics.

My mother was against me going to school. Her stand was that girls should learn to manage the household chores—cooking, traditional embroidery, sewing, taking care of the younger siblings—so when they get married, those skills would help in finding a good marriage partner.

My father just said he would go along with my mother’s decision, whatever that might be. But my grandfather, who was living with us at the time, had a big influence within the family and was in support of my going to school.

I understood that my mother was overworked, so I was torn between the need to help her and continue with education. There were times I would stay home and miss school for several days to pacify her, but after some time I would request to go back. My uncle often intervened and convinced my mother to let me continue, but it was a constant struggle with my mother.

In fact, when I was in the fourth grade I was so engrossed in my school books that I didn’t hear my mother call for help in the kitchen. She became so enraged she pulled my books away and threw them into the fire.

In my village, girls usually become aware they are being prepared for marriage when they reach around eleven or twelve. In our tradition, the nikah is the marriage vows ceremony and the couple are legally married. Then, at some mutually agreed later time, there is a rukhsati or ‘farewell’ for the girl and she goes to live with her husband and his family.

When I was in fifth grade, my parents had already chosen a partner for me and began to prepare for my nikah. My fiancé was my first cousin. As children we would play together, but when marriage came into the discussion I was too embarrassed to have any contact with him. He was in the grade below me at school.

I had no idea about what my nikah would involve before it occurred, but there was a lot of discussion within the house and the family about it. It was a hush-hush conversation between my parents and the village elders.

Getting married at eleven

I was in the fifth grade, aged eleven, when I got married. As per tradition in my village, I was woken up at 12.30am and informed people had gathered to consummate my nikah. I was asked to go to a room where I was asked by the wedding officiant: “Who is the head of your family, who is responsible for you?” Because my paternal grandfather was living with us, out of respect I named him, which made him happy.

Typically, amongst conservative families the groom and the bride are not even seated together during the nikah. So my husband was there but in a separate space, with any contact prohibited until my rukhsati.

I knew nothing about marriage or what life after my nikah would entail. I was never informed of any of my marital rights in case things didn’t go well. Following the ceremony, I realized I had been committed to another family and a partner. I was concerned that he was a year younger than me and not very mature in his thoughts and behavior.

I was also worried my schooling may be disrupted. I realized life was going to change, but I was determined to continue my education. Each time my school began a new academic year, I was told it would be my last. That would have been true if I wasn’t supported by my TCF school principal Ms. Farzana, who convinced my parents each time to let her stay a little longer.

Continuing education after getting married

My rukhsati took place when I finished tenth grade at 14 years old. By that time, I had learned how to insist on getting an education but also compromise. My husband initially had a limited outlook on life in general, but I was very lucky that I had the support of one of my uncles, who took my side and helped to convince the family that I should continue schooling.

He was able to influence my husband and my in-laws, but it was a year-to-year struggle for me. I had to look for allies from within the family and think of new and subtle ways to argue for my education. I knew I wasn’t going to give up.

Fortunately, my mother-in-law was a little more flexible than my mother about education. I was able to soften her attitude by working at the school as an assistant and getting some financial reimbursement while continuing my education.

At the same time, I continued helping as an assistant to the teachers at my school and eventually joined a Bachelor of Education program in Makli to qualify as a teacher. However, because the institute was several miles away and I didn’t have any means of transport, I took the academic classes at home.

I was able to purchase course books with the help of the charity who founded the school and found YouTube or online videos to help with my classes. I was able to take the board exam privately.

I’m currently waiting for the results of the program, but wish to pursue a career in the medical field and have been accepted into a four-year nursing college program in Makli, which will earn me a bachelor’s degree.

For a while, my mother-in-law was not in favor of my continued education and working at the school instead of helping at home. There were some difficult times during which I even separated from my husband as a result of family pressure. However, eventually my husband agreed to letting me pursue education and work. Struggles are always there but at every step, I try to think what is right and carry on with my life.

I want to be an example to other girls and women, who should have the right to go as far as they want to in education—not be limited by old and archaic traditions of no schooling for girls.

Shaheen Niaz, 22, is a trainee nurse who lives in the Sindh province of Pakistan. She attended one of the hundreds of schools in the country provided by The Citizens Foundation.