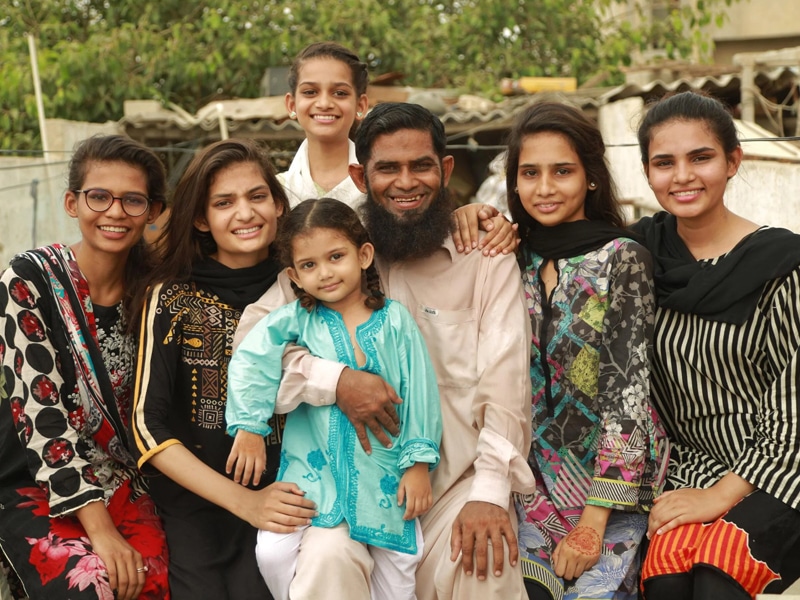 As Amjad Ali’s family swelled daughter by daughter and as the girls began attending school, his conservative brothers made a suggestion.

Money was obviously tight for the rickshaw driver and a woman’s place was in the home, so why was he educating them? His best course of action would be to marry them off. Mr Ali’s older brother thought that each daughter would bring nearly £800 at the time as a marriage payment.

“There are not many educated people in our family,” Mr Ali recalls. “And educating girls was unthinkable.”

Mr Ali was not so sure however. He might have himself left school after only four or five years, but he did not want his daughters to be uneducated as well.

“I decided that what happened to me would not happen to my children. I was very young when my parents died. I could not get an education. I have been working since childhood and due to lack of education I am still working as a labourer,” he told the Telegraph.

His wife Shahana, who had studied until the 12th grade and briefly taught at school herself, had persuaded him of the need to educate girls and she backed him against his brothers.

Opposition to girls’ education may be associated with the Taliban in neighbouring Afghanistan, but Shahana said she had come across it when raising her daughters in the Korangi neighbourhood of the Pakistani port of Karachi.

“When we sent the girls for education, people used to say: ‘Who teaches girls? Teach them household chores and get them married’.

“When I had four daughters one after the other, everyone including relatives used to make a lot of jokes. Like I’m having daughters of my own free will! People consider daughters a burden.”

Mr Ali’s defiance to his brothers’ wishes did not go down well. The issue festered and was compounded by quarrels over money and family property.

In the end he was even temporarily thrown out of their shared home.

‘I was arrested by the police’

“Opposition to girls’ education grew so strong that I was evicted from the house,” he says.

Facing ruin, his daughters even offered to give up college to find work and help pay off the family debts. He stood firm and refused.

Mr Ali says: “The brothers are still angry. Four times I was arrested by the police in different cases. I endured everything but did not let my children’s education get in the way. I spent a while starving, but I did my best.”

His reward for his determination, he says, is that now with six daughters and one son, the four eldest girls are qualified professionals, or studying at prestigious institutions. The youngest are still studying and aim to follow their sisters.

The family were able to put their children through school with The Citizen’s Foundation (TCF), a charity running a network of low-cost private schools in Pakistan. Families pay what they can afford.

TCF focuses on delivering education in the country’s most neglected rural and slum communities and aims to teach as many girls as boys. To encourage girls, the foundation employs thousands of women teachers and is the biggest private employer of women in the country.

Pakistan is estimated to have the world’s second-highest number of out-of-school children. Some 23 million aged 5-16 are not at school, with girls worse affected than boys. At primary school age, 32 per cent of girls are estimated to be out of school, compared to 21 per cent of boys.

Mr Ali’s daughters may have wrestled with the conservative views of their uncles, but such resistance is not widespread and is getting less so, says Amjad Noorani, a board member of TCF’s American branch. A lack of schools is the biggest problem to overcome, particularly schools situated close enough for parents to feel their daughters can walk safely.

‘My daughters are my pride’

“I feel that the biggest hindrance to not all children and certainly not all girls going to school, is not the cultural resistance from conservative families, but the shortage of schools. We just don’t have enough schools.”

Yet school-building loses out to building roads, bridges and other high-profile infrastructure.

“The politician doesn’t look at education as a priority,” Mr Noorani says.

Some communities may be cautious when a new school is built, but the new pupils become the best advert for the school and persuade more families to join in.

In Mr Ali’s family, Ameena, the eldest at 23, recently finished a five-year pharmacy course at Dow University of Health Sciences and is now lining up job interviews.

Next, 22-year-old Armina completed her bachelor’s degree in business administration from SZABIST, a well-recognised science and technology institute. She now works as an inventory executive for a textile business.

Muskaan, 22, the third daughter, graduated with a degree in computer science from the prestigious Institute of Business Administration (IBA) in Karachi and is a business analyst.

Mansha, 19, is studying at IBA in Sukkur, while Jaweria, 16, has taken her 10th grade exams and is ultimately hoping to be a fighter pilot.

Their brother, Ahmad, 15, is in 10th grade at the neighbourhood TCF school. The youngest, five-year-old Alisha, will be starting at one of the schools this year.

“What could be a happier moment than for a mother to see her children as role models?” Asks Shahana.

“My daughters are my pride. God has given me daughters who are more than sons. Not one but four of my daughters have fulfilled their dreams. The sacrifices that my husband and I have made. Now their reward is visible.”