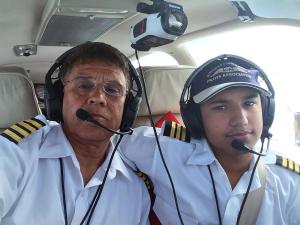 The following article has originally been published on NBCNews.com and was contributed by their staff writer Erik Ortiz with the help of Amjad Noorani and David Gardner (of TCF-USA) as a final tribute to the father-son duo who sacrificed their lives in a journey to raise funds for the education of children in Pakistan

When 17-year-old pilot Haris Suleman and his dad, Babar, charted their adventure around the world in the hopes of setting a record, their supporters never imagined it would end in heartbreak. The pair’s single-engine plane crashed after takeoff from an airport in American Samoa as they neared the last leg of their journey in July. Rescuers retrieved Haris’ body from the wreckage in the South Pacific Ocean. Babar was never found.

But out of tragedy has been a wealth of generosity. The Sulemans had already earned about half of the $1 million they were trying to raise for Pakistani schools by completing their flight. Since the crash, donations have continued to pour in, and recently topped a staggering $3.1 million, family members in Plainfield, Indiana, told NBC News.

“In the aftermath of the accident, we saw how they were able to inspire,” said Babar’s daughter, Hiba Suleman.

Earlier in the year, Haris, 17 was awarded the Sitara-i-Imtiaz (Star of Excellence) in Pakistan in honor of his courageous attempt to set the record for a worthy cause. The Sitara-i-Imtiaz is Pakistan’s 3rd highest award granted by the President of Pakistan. The 17-year old son was on the final leg of his brave attempt t to become the youngest ever pilot-in-command to fly around the globe in 30 days when his plane crashed off the coast of American Samoa on July 22, 2014.

TCF and the students it supports are eternally grateful for the sacrifice Haris and his father have made.